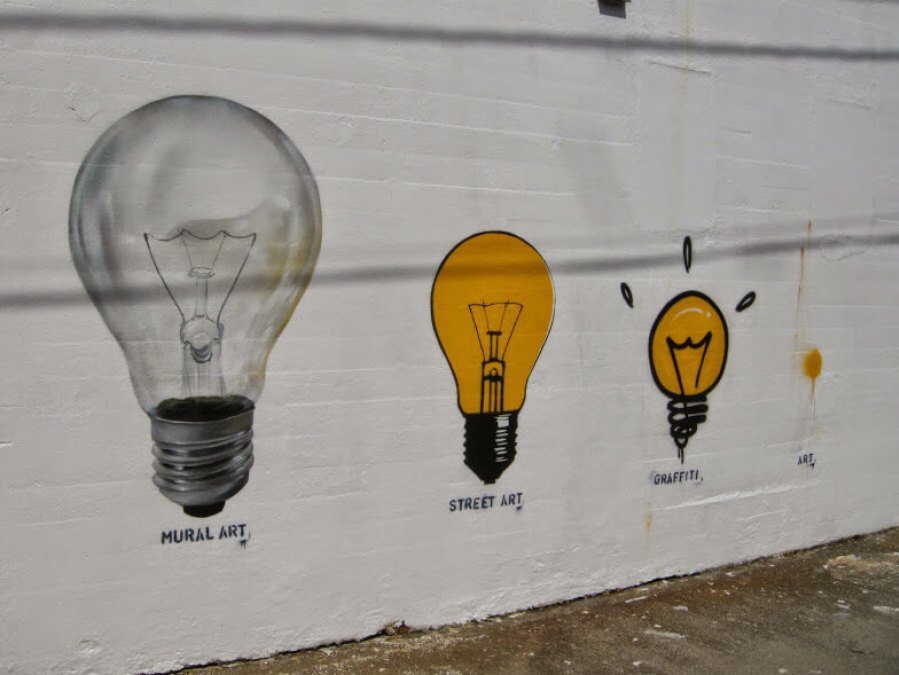 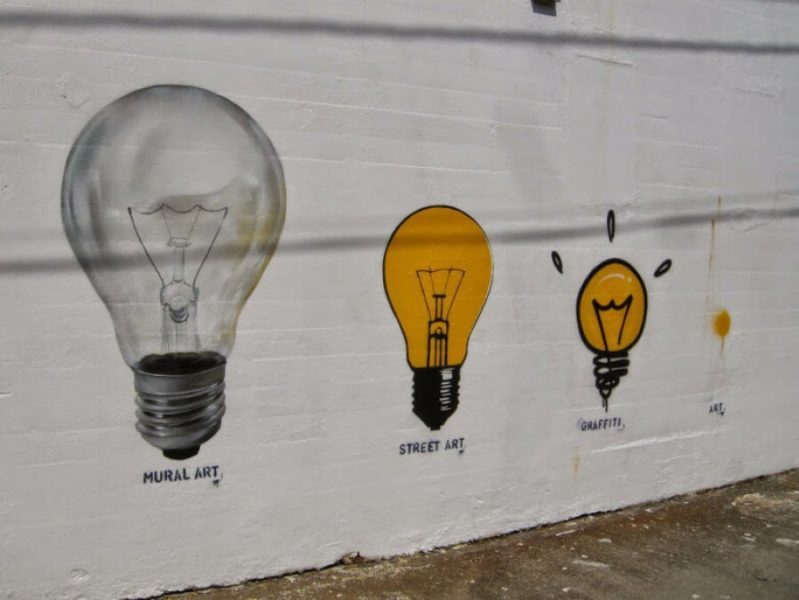 Being a mural artist that often uses spraypaint, I have noticed that a lot of people seem to be confused by the terms “graffiti“, “mural” and “street art”. That’s understandable; we live in a confusing world, language is fluid, and art is subjective. However this is something I have spent too long thinking about, so I thought I’d run down the way that I personally categorise the many permutations of “paint on a wall” that you might encounter.

There is a lot of overlap in the three definitions, but I have noticed that the terms are either used interchangeably, or are used to praise one form at the expense of the others – either “this is street art, much better than that ugly graffiti“, or “that’s not real graffiti, it’s in a legal spot, may as well call it a mural“, and all arguments in between.

As we all know, graffiti is usually created without permission, and mostly involves letter-based tags and pieces, sometimes with characters / backgrounds as well. Some people consider the more aggressively territorial components of graffiti (especially tagging) as more of a sport, as it is based on claiming an area, ‘getting up’, and taking out work by any rival crews / writers.  (Extra definitions: a ‘tag‘ is simply names written with single lines, a ‘throw up’ / ‘throwie‘ is usually bubble letters, often with one colour for the fill and another for the outline, a ‘piece‘ is painted with three or more colours, often with a background, a character or other elements, and a ‘production‘ is a wall with a number of pieces by different artists that often have a common colour scheme / theme to them.)

An example of what is traditionally considered graffiti (artists unknown)

Graffiti is predominantly painted with spraycans, but it is also created with marker pens, paint rollers, etching tools, fire extinguishers and other (mis)appropriated hardware. A major element of graffiti is the aspect of anonymity. As a direct result of the illegal nature of graffiti, the artists traditionally work under pseudonyms. Tags were often composed of longer words (e.g. Cornbread), then in the 70s and 80s shorter names (usually up to 5-6 letters) became more popular, for the obvious reason that they could be written faster. Some people believe that letters are essential for a piece to even be considered graffiti, and others believe it also has to be created illegally to fit their personal definition.

Murals have been around for as long as humans have been living inside shelters. From carved walls in Egypt and mosaic works in Ancient Greece, to frescos in the Renaissance era, through to the political murals of the mid-20th century as seen in Latin America or Ireland.

Stylistically a mural will typically cover the entire wall, top to bottom. They are painted with permission, the artists are usually paid to paint the wall. They are usually signed with the artist’s real name, but that has changed, thanks to… 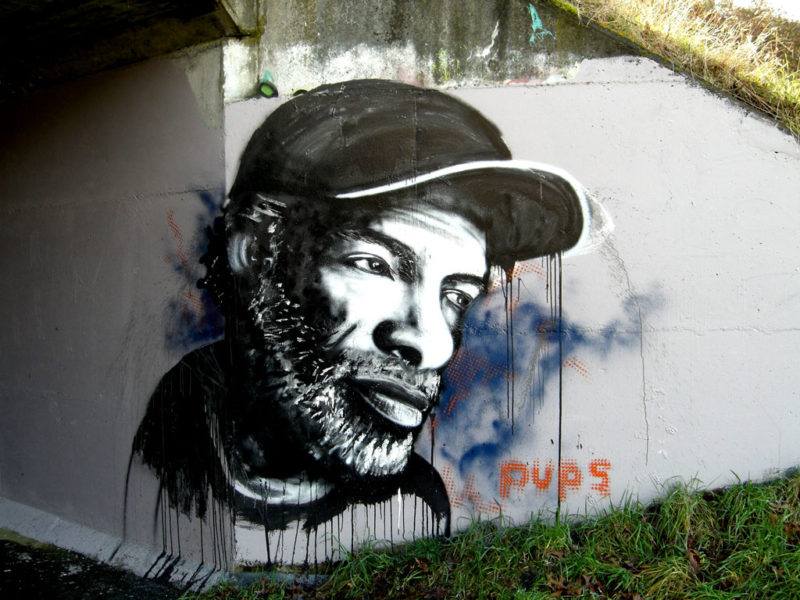 I usually date the period of street art – when it was hitting peak popularity – as running from 1999 – when Banksy painted the first piece in his signature ‘stencil’ style (‘Mild Mild West‘) – to 2008, when Shepard Fairey designed the ‘HOPE‘ poster for Obama’s presidential campaign; I’d say that piece marked the ultimate absorption into the mainstream of this previously underground, mildly rebellious art movement.

Now, a decade on, Banksy is seen as, well, trite – if you do a Google image search for “banksy style wall transfer” you find thousands of companies producing generic knockoffs of his work, not to mention the countless stencil artists creating vaguely political works in an identical style. You can also find a thousand pithy sayings with a stencilled figure next to them all over Facebook which are incorrectly credited to him. Doing a similar search for, say, “shepard fairey style” will throw up a million corny iterations of his HOPE poster.

The style of  street art, on the other hand, encompasses a diverse range of works and mediums, and is still an evolving aspect of mural art, graffiti, and the public consciousness as a whole.

Generally the imagery can be seen as originating in the lowbrow / pop surrealism art movement (which in turn has roots in the graffiti, surrealism, comics, pop art and psychedelic art of the 20th century), and – much like graffiti – pieces are rendered in public spaces using stencils, spraypaint, acrylic paint, stickers and a range of other appropriated mediums (yarn, plastic cups, etc etc). Works are typically presented anonymously, or signed with a pseudonym – the graffiti influence often comes through in the choice of names, with a focus on short, punchy words – but, to be honest, a lot of modern street art is essentially mural work created for free. (If you’re lucky you’ll get free paint, maybe some food and / or petrol vouchers as well.)

The style has, of course, been swallowed up by capitalism, which now poops out grungy “street art inspired” products that you can pay through the nose for. The revolution will be commodified! 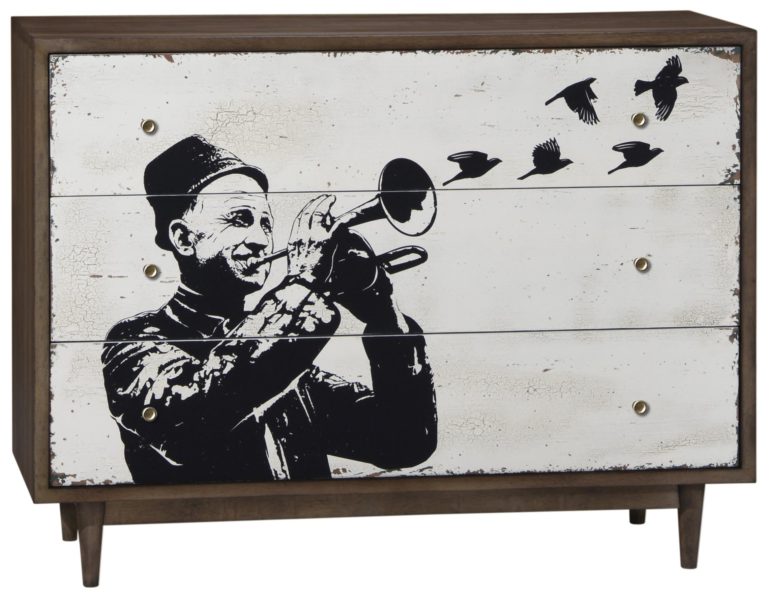 “Williamsburg Single Dresser with Street Art Style Screenprint”, yours for only $1,449.99

(Confession: personally, I hate it when my art is described as ‘Street Art’. Hatehatehate it. I imagine it’s like being a musician who plays experimental folk-punk, and then your album is described in the media as “guitar music”.  It’s a vague term that primarily describes the tools you use to create your art, and doesn’t connect you directly to any particular historical strands of creative thinking.

The problem is… well, it’s accurate. I do paint public artworks in the street, and I do use spraycans and stencils to paint whimsical characters, with a strong pop culture influence – which is a fancy way of saying “I copied it from a picture I found online”. But holy shit I still hate the term. It seems to suck any deeper meanings out of my artistic creations, relegating them to Instagram fodder created for Likes and not much else.

Because of my ego-driven disdain of the term, I’ll try and avoid it when describing my own work. If you ask me what I do, I’ll usually reply that I’m an artist who often paints murals and public art. This isn’t a very descriptive explanation either, but I think it best describes the odd pigeonhole I have found myself in.)

In conclusion: they’re all entirely valid forms of art, and I should stop splitting hairs. And get back to painting. 🙂