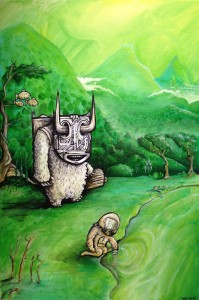 Start with the archetypal apology for sporadic updates, which inordinately draws attention to the date of the previous entry (it’s August last year). Offer up excuses; new baby, busy job, lack of hours in the day.

Anyway, now I’m back to the regular schedule. My new fans and more observant haters may have seen the first four pieces of my new series bubbling up in the last year. You can see them collected here, and I will add more as they are (slowly) finished.

The series is called ‘Exoplanets’, and it is based on loose artistic interpretations of the exploration and settling of extrasolar (and possibly habitable) planets. (You can see a list of some of these planets here.) Of course I can’t stick to that brief, though, and one of the first four is based on one of Jupiter’s moons instead, the weird little hunk of red rock and ice known as ‘Amalthea‘.

The series is inspired by my life-long fascination with science fiction – particularly from the ‘Golden Age’ of the genre, the American and English sci-fi of the 1950s and 1960s. (My favourite authors include Philip K. Dick, Isaac Asimov, Frederick Pohl and John Wyndham.) Refreshingly free of the cynicism that pervades so much modern art, the genre has always been facing outwards, ignoring humanity’s petty struggles, and imagining where our longer arc was going to take our species.

Science fiction has generally been looked down on as a subject matter by artists – too fantastical, too mainstream,  and a bit too much of the ’14 year old boy’s bedroom’ for most fine art aficionados to even acknowledge. It’s only in the last few decades that space-faring science fiction has matured into a wholly legitimate genre, with the success of genre-bending films such as 2001: A Space Odyssey, Alien, Cargo and Moon showing the true depths of the human psyche that can be explored when we focus our attention on the stars, and our struggles to reach them.

The flagship piece of this series so far is ‘Kepler 22b‘ (pictured), which I believe is the best painting I have created  in terms of realising the initial vision.  You can purchase prints of this work on my Redbubble page, and the work itself will go up for sale as soon as I find a gallery that will consider showing the ‘Exoplanets‘ series in full. (Apparently I’m too sci fi / amateur / illustration-ish / fantasy-based for the majority of galleries I have spoken to, but the search continues…)

Any ideas for the next piece in the series will be welcomed, as will any suggestions on Auckland galleries that may consider showing the works.