So I thought I’d spread a bit of the love on here and give some publicity to five artists from New Zealand whose work I love, and who have inspired me in my own artistic career. (This, of course, means I can totally link to their profiles on Facebook when I post this, and hopefully siphon off some of their fame to try and kickstart my own piddling career. Yay!  Second-hand publicity!)

I’ll start with the lesser known, and move through to the artistic juggernauts… oh and I’ll try and credit the artworks I post; obviously, if anyone has a problem with me posting their work, let me know (and I’ll promptly replace their dose of ‘free publicity’ with a bitter note of disappointment.) Also bear in mind that this is a personal viewpoint; I’m not trying to give the life story of these artists, I’m just explaining why they’re special to me. I will include the addresses of their respective websites for further reading, though. 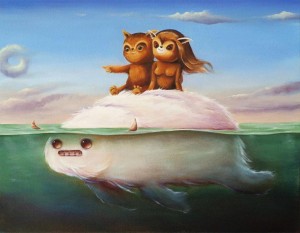 Full disclosure; Michael is the only one on this list who I actually know in person. In all honesty, though, I’d still think his work was great if I didn’t know him.

I first became aware of his art when I was working at the Depot Artspace in Devonport (Michael lives on the North Shore). After seeing a piece floating around there, and how close it was to what I was trying to achieve in my own art – anthropomorphic creatures who exist in a fantasy land, and exist somewhere between’cute’ and ‘threatening’ – I made it a point to introduce myself. Well, okay, my memory isn’t too good, maybe he introduced himself to me. Either way, I gave him some advice on building a website, he gave me advice on paint supplies, my wife insisted we buy one of his pieces at an exhibition, and every time I leave the house now I am farewelled by one of his little creatures poking out it’s tongue.

If I remember correctly he’s been working at an art supply store, and you can see that he has a love of the materials when you view his work. Every detail is perfect, the characters are rendered with depth and well-thought-out colours, and they are presented beautifully. He even frames that shit! Whoooohah. (Edit: I didn’t remember correctly. He just knows his stuff.) 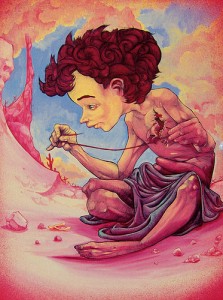 Before I moved to Auckland I was already a fan of Elliot’s work; he made quite a name for himself in graffiti and street art under the moniker ‘Deus’, and worked with the kingpins of that scene in New Zealand, the TMD Crew (which also includes Pest5, Phat1 and Askew, three of my favourite spraycan artists.. but that’s another post). However his work in other mediums has made me appreciate his art even more. His grasp of character, line weight and composition is continually evolving, and the latest pieces – in mediums such as ink and watercolour on paper – are a continual source of inspiration.

Another great thing about Elliot’s work is that – like Michael’s – it isn’t geographically biased. That is, you don’t look at it and go, ‘Oh, that’s a New Zealand artist’. Because, unfortunately, we have had too much weight given to that aspect in the arts made in this country; this bias has resulted in a glut of kiwiana references, Rangitoto paintings and slightly cringe-inducing displays of mild nationalism. Of course this can be done well (see Liam Barr and Dick Frizzell below), but more often than not it’s as corny as using an internet meme in your art to try and give it more traction. (Oh.. wait.)

I’ve met Elliot a couple of times, but I’m not sure if he remembers me; he was busy painting, and I tend to get nervous around people whose work I admire, like some goddamn starstruck fanboy. Anyway, I can only hope he gets more recognition, because he deserves it more than a bunch of the rubbish that is filling up our dealer galleries… well, that’s not including the next two on my list, of course, starting with… 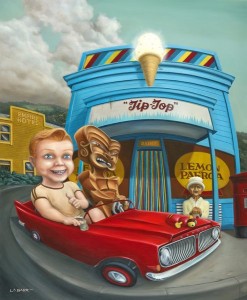 I’m pretty sure this guy’s “made it” by now because I once saw an exhibition of his which was right across the road from the Auckland Art Gallery. Anyway, he’s still not enough of a household name here, and totally deserves to be.

His work touches on all the Kiwiana motifs, but has enough of a creepiness behind it to make it palatable to my jaded, post-postmodern outlook – his Tiki characters in particular seem to have an air of menace, and check out the peepers on that kid in the picture!

Anyway, the main aspect of his work that I love is his attention to technical detail; precise, controlled, and well-defined shapes make up the characters and people, and then he tops that accuracy with a cast of weird, wonderful and slightly Gothic characters portrayed in an original style.

If I had to draw any comparisons it would probably be somewhere between Magritte and Mark Ryden; and those are some awesome comparisons. 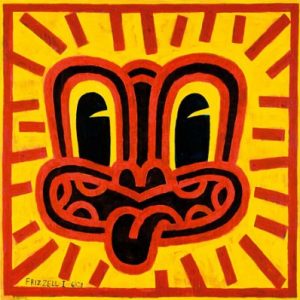 Dick is an artist who is very nearly a household name in New Zealand, and rightfully so; he has been exhibiting his work for longer than I’ve been alive – and I’ve got grey hairs.

As well as being the official artist of the 2011 Rugby World Cup, he has also provoked national debate with his ‘Tiki’ imagery of the 1990s (paving the way for Liam Barr’s appropriation, perhaps) and firmly planting a signpost on the road to an enhanced form of multiculturalism, where all sides involved can contribute to a shared pool of artistic motifs and history without either side taking offense (hopefully).

Even more than that, though, Frizzell has taught me that you can be a successful artist and not stay stuck in one stylistic rut. You can pick from the trees of advertising, graphic design and popular culture, blend that all up with your imagination, and create a lineage of work that, combined, has as strong a presence as 100 variations of the same image would have, if not more. It was refreshing to realise that having many styles can, in itself, be a style.

Take this piece as an example; it’s the head of a tiki, which is a common South Pacific motif, but it’s done in the style of Keith Haring, the New York poster boy (heh) of street art, and it also appears to have the notched pupils of Mickey Mouse. Which is pretty much three awesome things rolled into one. What’s not to love? 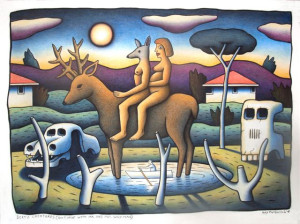 Australia has tried it’s hardest to claim Reg for their own, but let it be known – Reg was born in Auckland, New Zealand, as Chris O’Doherty, and he lived here for nearly 20 years before his family moved to Australia. So, much like Crowded House and Phar Lap, we helped spawn something which has now come to represent Australia. Huh. Anyway, that’s irrelevant; he’s freakin’ awesome, and his partnership with the clothing company Mambo led to pre-teen Paul seeing some really interesting art masquerading as T-shirt prints. I can confidently state that his ‘farting dog‘ print was a profound inspiration on my art. (In other words, I saw that when I was ten years old and it was the coolest shit ever.)

In later years, as I came to appreciate the breadth of his catalogue, he has also given me the confidence to continue injecting humour into my works (not that I’m great at it) and, more importantly, to embrace commercial output as a way to reach a wider audience. I wouldn’t know of his work if it wasn’t for him pairing up with Mambo, but the important aspect is that he retained control, kept his artistic integrity intact, and has continued to stay true to his artistic vision throughout.

It’s been a fact of the artistic lifestyle for as long as there have been artists; we’re usually shit at selling our work, we need to be aware that our art is a precious commodity, and it’s nearly impossible to exist in an artistic bubble outside of the commercial universe. You are either going to pair up with like-minded people and help them take your work to a larger audience in a meaningful way, or you can close your eyes to the opportunities and try to survive inside your hermetic art bubble. I’ve been doing the latter for far too long, and it’s only thanks to artists like Reg (and Dick, Liam, Elliot and Michael) that I have built up the confidence to get my work out to more people…. and hopefully, one day, I can create something as memorable as that farting dog.

So, there you have it; five of my local sources of artistic inspiration.  I ended up writing for longer than I expected, which probably means I have work I was meant to be doing, so I guess I should go and do that now… but thanks for reading!